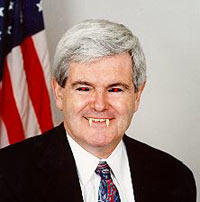 A recent interview response from Newt Gingrich has the Catholics in a tizzy. Apparently they are upset that he wouldn't take a stand on whether a fertilized egg that had not yet been implanted in the uterine wall was a human life. Of course it is, so the nuts win on that point, but they're both missing the forest for the trees.

The correct answer from science is that life is a continuous process going back millions of years without interruption. There is no specific moment when the life of a single organism begins [or species, for that matter]. Or, as I like to say, life begins long before conception. But the real question I think the religious folks are trying to ask is either: (1) when does the SOUL implant into the organism or perhaps (2) when does the life of value equal to that of an human child begin [obviously not before fertilization, and setting aside the usual liberal quip that conservatives value fetuses more than children].

The more you know, the harder the question gets for religious folks. For example, what if there is a fertilized egg, but shortly after it starts to divide into a multicellular organism, some developmental flaw occurs that guarantees it will never be able to develop anything even resembling a brain. The pregnancy would fail naturally very soon after that, but it raises a question to someone who claims the fertilized egg had a soul or equal value to that of a human, since the event that made it impossible for it to develop into something more meaningful than a blob of tissue happened after fertilization.

But if you reject the religion or the religious proscriptions, the question itself pretty much disappears. Let's hope Newt disappears, too.
by RhymesWithOrange No comments: