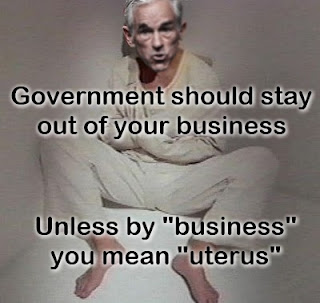 Both Ron Paul and Newt Gingrich have been heard recently complaining about all the "establishment money" outspending them, and to a liberal like me, this sounds like an argument for campaign finance reform. But coming from these two gentlemen, it qualifies as an endorsement of Mitt Romney. Let me explain.

Consider Ron Paul's position on campaign finance reform. Whether in the form of public financing of campaigns or other rules governing the finance of campaigns, his position is that it's UNCONSTITUTIONAL.

To those who don't know conservativespeak, "unconstitutional" does not simply mean disallowed under the constitution as currently applied or not legally valid without an amendment to the constitution. That's the liberal definition of unconstitutional. In fact -- you may find this shocking -- in conservativespeak it does not even mean counter-to or in violation of the correctly interpreted currently active text of the Constitution! In conservativespeak, you see, the word "unconstitutional" means "fundamentally evil and wrong despite the appearance of being morally right." For example, protecting people from financial fraud -- it seems like a morally right thing to do, but financial fraud is also highly profitable -- thus, such a regulation would be termed "unconstitutional". See how it works? In crazytown, the world is at a crucial juncture demanding radical change. Without it we are all DOOMED. And also, it's a moral imperative that Mitt Romney be able to leverage all that "establishment money" to grab the reins of power and keep us on that path to doom.

But Newt Gingrich's position is a little more subtle. Like Paul, he hails from crazytown, but he also keeps a house [and a mistress] in DC. For Newt, it's not just a matter of constitutionality -- unlimited political spending is a moral good in and of itself! Perhaps because living in DC opens ones eyes to the importance of special interest money in helping leaders to sort policy priorities. And I'm not referring to the big bucks he made lobbying on behalf of Freddie Mac in the years leading up to the financial crisis he would then blame on Freddie Mac's cozy position in the halls of power. I'm referring to his reaction to the Citizen's United case. In an interview the day of that decision, Newt had this to say:

Well, I'm delighted. And I think I would say that the real campaign finance reform under our Constitution would be to allow anyone to give unlimited amounts of after-tax money.... I'm saying that it allows you to have a middle-class candidate go out and find allies and supporters who are able to help them match the rich....

Well, if that's your position, Mr. Gingrich, then the failure of your Super PAC to raise enough money to match Mitt Romney's Super PAC is a triumph for our system of government! It sounds to me like an endorsement of Mitt Romney.
by RhymesWithOrange 2 comments: