*UPDATE* Vote for Heather Macre and Terry Goddard only.

As promised, here are the results of my evaluation of the candidates for CAP Board / Central Arizona Water Conservation District.

These are obviously going to be biased, but to avoid injecting my bias too quickly, I built a formula with four components. I did a lot of guesswork to fill them in, but hoped my mistakes would average out well enough. 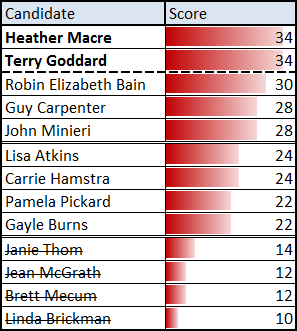 Goddard and Macre obviously get two of my five possible votes, with scores that win pretty much across the board. What a coincidence that they are the only two Democrats ;)

If I were just to vote for the five best, I might read more closely to refine the scores, but Guy Carpenter and Robin Bain stand out. Though conservative Republicans, both appear to be strong subject matter experts, so their constructive contributions could make up for some of the negatives they bring to the table. Some people think this is a position where expertise counts.

Just as important, however, there are four candidates who need to be defeated. Brickman, McGrath, Mecum, and Thom are unqualified and unacceptable!

Now, the problem is to determine how to vote strategically to meet the two goals of


I am currently leaning towards just voting for my two to increase their chances in this Republican-dominated region and just crossing my fingers in hope that enough Republicans are sane enough to pick their qualified folks instead of their batshit crazy ideologues who have no idea what this office is about....
by RhymesWithOrange

Hi, why do you rank Lisa Atkins tied with Carrie Hamstra and John Minieri higher than Hamstra? From the limited info online it seems that Atkins may be a "tea party wingnut"? http://www.azcentral.com/arizonarepublic/news/articles/2010/10/10/20101010tea-party-arizona-water-panel-race.html I agree with your top 4, but can't seem to decide between Hamstra and Minieri (and there's not much info that I've found other than the AZ Central website).

I think Lisa Atkins kept some of her default score because I didn't get enough info and she got some _default_ scores averaged in... I skipped that article from 2010 -- probably should have re-read it.

I don't remember what gave Minieri an edge, but like I said, if I decided to vote for five I would refine the scores.

Vote for only the top two! That's my vote.

I am a utility consultant and also share your general philosophy re: conservation.

I think your top 3 are worth a vote rather than top 2. If I had to pick a 4th it would be Guy Carpenter.

I agree with the other commenter that there is no clear No. 5, so I advocate the top 3 or top 4 as listed.

I don't understand the "just vote for two" strategy. How does that increase the likely hood of the top two winning? Voting for another three candidates doesn't take votes away from the two good candidates. And more importantly, if neither of the top two candidates get enough votes, then by not voting for the lesser candidates you are increasing the likely hood of the wingnuts winning. Where is my logic going wrong? In fact, it seems more important to defeat the bottom five then to elect the top two. A top-two win will still only be a minority voice for reason and common sense, but any single wingnut win will increase the wingnut tilt of the whole enchilada.

If you vote only two and those two lose, that is the same as not voting at all.

The next person comes along and doesn't vote for your first two choices but DOES vote for your 3rd and 4th choice plus a couple others. Now the counts look like this 200, 199, 202, 200, 201, 200. Your choices are getting further away from winning because you voted for more than 2 and your less desirable choices end up pulling ahead.